Our 21st-century understanding of the symbolic content of art comes from a group of scholars who gathered in Hamburg in the 1920s. The most prominent among them were Erwin Panofsky, Aby Warburg, and Fritz Saxl. Together they developed much of the vocabulary that continues to be used in the 21st century by art historians. "Iconography"—with roots meaning "symbols from writing" refers to subject matter of art derived from written sources—especially scripture and mythology. "Iconology" is a broader term that referred to all symbolism, whether derived from a specific text or not. Today art historians sometimes use these terms interchangeably.

Panofsky, in his early work, also developed the theories of Riegl, but became eventually more preoccupied with iconography, and in particular with the transmission of themes related to classical antiquity in the Middle Ages and Renaissance. In this respect his interests coincided with those of Warburg, the son of a wealthy family who had assembled an impressive library in Hamburg devoted to the study of the classical tradition in later art and culture. Under Saxl's auspices, this library was developed into a research institute, affiliated with the University of Hamburg, where Panofsky taught. 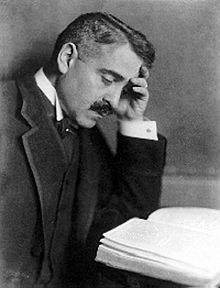 Warburg died in 1929, and in the 1930s Saxl and Panofsky, both Jewish, were forced to leave Hamburg. Saxl settled in London, bringing Warburg's library with him and establishing the Warburg Institute. Panofsky settled in Princeton at the Institute for Advanced Study. In this respect they were part of an extraordinary influx of German art historians into the English-speaking academy in the 1930s. These scholars were largely responsible for establishing art history as a legitimate field of study in the English-speaking world, and the influence of Panofsky's methodology, in particular, determined the course of American art history for a generation.